All posts by Redkite

Well that's basically that. As evident by the feedback on the poll, I'm going to change the voting style

As the blog has had little activity and as such, been locked, I'll be reuploading it at some point and getting the old blog deleted - obviously the new blog will have the new voting system.

To those whom had voted - I'll speak to you soon, your contributions won't be neglected.

I hate to go on about this constantly and I apologise in advance because it is probably extrenely annoying that you keep seeing me whine and winge about the Super-Powered War but as pointed out by Pach in a recent discussion, it is evidently the voting demand of the Super-Powered War which is putting off voters and in turn causing inactivty which locks the blog's comments.

As such, since this is just as much your event as it is mine due to you all providing fantastic heroes and villains - I want to discuss the possibility of changing the voting style to something more suitable to the large content the blog has.

The proposed format in my discussion with Pach (By him kindly) was a tally and summary system.

Essentially, users would look at the three sections by which the match ups are split up: Leader, Higher and Lower Tier.

They would then tally the survivors of the match ups based on who they think would win, e.g. Lower Tier: Heroes: 9 Villains: 3 or something like then provide a summary of how and/or why. Ultimatley, you'd have 3 tallies of the survivors of the Leader, Higher and Lower tier and 3 summaries and then possibly some concluding notes on the ultimate winner.

It is undoubtable that this change in voting style would be much smaller than the match up per match up style I currently have in place and as such, more people could hopefully vote sooner and the blog could end much sooner.

Here's a poll if you're lazy:

Let me know what you think of this, it is good? Bad? Awful? Got any ideas yourself?

(edited by Redkite)
A reply to Affectos
0

Something definitely needs to be done. This may seem like a huge workload but it's an idea -maybe new users should ensure the battles they plan to do are listed or something and reviewed while they are new? Perhaps this role could be handed to the rollback(s) [New ones could join the staff team so this can be done].

If not, maybe we need more definitive guidelines on who can fight who. You wouldn't let Superman fight US Marines, and you wouldn't let a dinosaur fight a resistance group formed against an alien invasion. Without limiting creativity, maybe guidelines for who should fight who (Being realistic) need to be inplace if they aren't already?

Just to add to my idea, perhaps if commenting is not disabled after a few weeks, the user disables it prior to bringing out their next battle?

It happens on a day to day basis,

it is one of the most annoying things that anons can do,

it clogs up Wiki Activity and wastes user time.

I am of course - talking about when contributors and in very rare cases, users, 'resurrect' old battles by commenting on them. While my proposition is only minor, I feel as though it is something we do need to bring to the table and discuss.

The penalty for commenting on old blog battles is not light, and 'resurrecting' them into the Wiki Activity section is punishable by a three day ban, but let me ask you something.. has that ever really stopped them? While the punishment is effective and clear, anons still go for it and they will continue to do so undoubtedly, but what if we could change that?

All I'm proposing at it's core element here is that we either ensure or encourage users to disable commenting on their blogs. If they are going to announce the blog is over in their comments, surely they have the time too make an edit that doesn't show up on Wiki Activity.

I think we need to share ideas and opinions on this. My idea is that we just ensure or make it a rule than users disable commenting on their blogs after the blog is closed, and if this idea here is perused, we can publish an official blog or forum post for everyone to see so they know how to do so if they didn't before. Disabling the comments does not show in Wiki Activity so disabling all your own would not to do and current ones would not do so either.

(edited by Redkite)
A reply to Leolab
0

There are a hell of alot of battles on our reservation hub, and although we do have members who consistently pump put battles on a 1-2 week basis with proper reservation, some battles will just never get done. I personally went over my list of reserved battles on the hub a while back only to truly realise both how terrible some of my ideas were and that I will probably never do the majority of them and therefore, I scrapped them.

18 months sounds like a reasonable reservation time period and I think this is a good proposal, I fully support this.

(edited by Redkite)
A reply to Drayco90
0

Well - this appears quite the divide.

(edited by Redkite)
A reply to SevenArrows
0

I am liking the sound of this, but I think I'll want to see it in action first before I develop further support

While I hold no grudge with Swg, I think we need to look at the rematching an old battle by Swg: Thor vs. Darkseid. I would very much like to do this battle and I believe this battle needs to rematching for a couple of reasons.

(edited by Redkite)
A reply to Lasifer
0

Strong Support He is a all round friendly user, he is polite and involving in the community with regards to voting, battles, tournaments and events.

I am probably going to conclude this soon as I want to get on with creating the first phase, sorry for all of those interested in the power tree system, I will not remove the idea and my work done towards a power treee system as there will likely be a time when I can use it!

Both ideas work. But the for the majority, the 2nd option of no tree system inspires the use of much more creative heroes which is something I would never denounce. I put my faith well in this wiki's community to be able to properly use this system and not produce an army of Supermans which will landlside the other team, but even too counter that, everyone will require atleast one weakness and this number can increase based on their over powered-ness and their will be limitations of factors like strength (The limit being 50 tonnes), and if you were to produce a character capable of lifting 50 tonnes, you would not be allowed to give them super speed, super agility, reflexes, etc, thus making it fair and prevent the creation of an army of Supermen. The other issue with the tree system is that it would take me absolutley ages and I am better off saving the tree system for a Super-Powered Touranment and sequel to this event.

I am in the process of designing a one off event I'm calling the 'Super-Powered War', and that's all I intend for you to know about it for now with the exception of this discussion in which I need to settle a debate. The issue I am having is how to co-ordinate this event in regards to establishing your character's powers for the event so if you would be as kind as to answer this little poll below, I would be very grateful and will explain in a little bit more detail below the poll.

Someone help me, my chat is completely messed up? Does someone know how I can fix this and so it can stand as a future reference to anyone else experiencing the same technical difficulties: 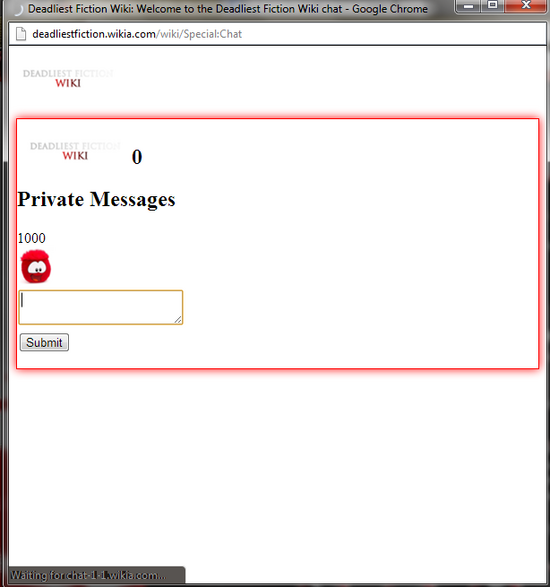 EDIT: Picture resized so that it doesn't go out of the boundaries

(edited by administrators)
A reply to BeastMan14
0

I also support this strongly, both warriors were poorly represented with a lack of their full armoury of weapons they have availible to combat which can potentially make votes biased due to a lack of information to make correct votes, aswell as this, the blog lacked structure, pictures and even bios of the warriors plus the conduct of the user in the comments was very poor. He did indeed call another user stupid and ignored a comment and made a childish remark to another user stating 'Dont Talk to ur self'. This battle was not even done correctly as votes are collected via comments with suitable evidence. Not polls.

I wanted to start a discussion to see people's view, there is no need to swear about it and if you dislike it that's respectable, I haven't expressed an opinion, I will only answer questions about it. It is an interesting matter, thank you for all the feedback so far.

I think we have to agree there are some very funny users on this wiki. Whether it's completely random or a well structured joke, we've got some people who have all made us laugh at some point.

As you all know, well.. atleast hopefully know, the year is coming to a close. With that comes our yearly nominations for awards and this year I wonder if we should add a Funniest User of the Year award?