First off welcome to Deadliest Fiction, we always like to see new members interested in making battles. With that being said I can point you to some resources that give you a basic framework of what a battle should be.

And before I forget, I would also suggest not using discussions, as we mostly operate on forums for questions, rematch requests, etc. We also have a Discord server for this wiki that the majority of users are on. It's much easier to communicate problems like this there as well. I hope you take this advice to heart, and that you have a good time here!

A reply to Field Marshal Montgomery
1

A reply to Detective Loki
0

(edited by Tybaltcapulet)
A reply to Detective Loki
0

Since discussions is cancer and won't let me edit my comment, I will add my opposition to Sam vs Kai

Oppose on everything Beast said

You bring up good points as to why this battle should have a rematch, but I have to Oppose simply on the count of your lack of experience. As someone who tried to get a rematch when they first got here, I can tell you that establishing yourself as a user is very important to both making good battles, and gaining the trust of the other, more experienced users.

I would suggest you create battles of your own, check out the battles of other users, and join our discord to better communicate with us. If you can find someone who wants to do a collab with you and show you a bit of the ropes in the creation of a battle, I would likely Support this. But as it stands right now, I can't in good conscience do that for you.

Holy shit they got rid of source formatting even. Seriously? Anyways, a Support from me.

A reply to Detective Loki
0

Big Supp for both

Don't hate yourself Killer, feel the spite flow through your bones

1. "Mr. Tybalt Capulet, please chill. I'm not here to make any fights with you. I only want to at least prevent more battles from getting put in this predicament."

First off, there's no need to be so formal and call me Mr., like Tybalt is fine dude.Second, what part of my rebuttal convinced you that I required to be told to chill? I mean yeah I was tough on your arguments, but that was because I believe them to be rather poor.

2. "I admit, I might have forgotten about the shields. But there's no denying the fact that the Norse got their ass kicked by the Native Americans, even with their shields ."

Um, I'm confused on multiple fronts here. In my rebuttal, I specifically noted that the Native Americans outnumbered the Viking group, the Vikings were in unfamiliar territory, and were dealing with more seasoned warriors with actual ranged options, aka bows.

3 "Even without armor, shaolin monks are hardy warriors. They're the types of warriors who can do ungodly stuff like this and this . Those feats are probably similar to armor."

Like Laqy said, they're designed to be theatrical. Can you honestly tell me that the Shaolin can reliably pull this trick off in the heat of battle, with the Viking putting his full force into his blows. Especially when it's not at the optimal angle shown in the videos you provided? I'm thinking that's not going to work out in your favor, unfortunately.

TLDR for 2 and 3 basically what Laqy said

"Does the shaolin monk's speed and agility be able to counter the armor of the vikings? The Jian no doubt would get through the Viking's unarmored parts, and the dao and defintely the glaive (crescent blade) has enough blunt force to kill even those with chainmail and helmet (a simple Saxon axe is able to cleave through a Norse helmet easy)."

To answer the first question, no because throughout this entire paragraph you've failed to mention at any point the shields the Vikings had. You've exclusively mentioned his chainmail and helmet, but not the shield. This is another layer they have to get through before they can even begin to take him down. I also don't see it as feasible that these swords you're detailing are able to reliably kill a Viking through their helmet while that Viking is attacking you at the same time, and you're unarmored. You can have all the agility and speed in the world, but being unarmored like the Shaolin against someone who is can pretty much throw a monkey wrench into that. Also at the end of the day, it's not like not having armor is gonna give the Shaolin anything superhuman, they're just martial artists against fully armored dudes with more practical combat experience than them.

"Remember, the Vikings did lose against the Inuits and the Native Americans, who had no armor and only had stone-age and bone weapons. I believe the shaolin monk can take the Vikings too. I myself don't think they can beat Vikings, but they certainly has the weapons and x-factors to earn a few kills."

It is flat out incorrect to assert the Inuit didn't have armor. They were known for wearing ivory lamellar armor and wooden shields. Here's a picture to prove it: 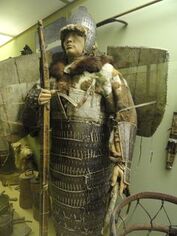 And as for the Native Americans, they're hardly comparable to the Shaolin, who were warriors as a last resort, and more geared to simply being martial artists, while the Native Americans were far more used to combat. And even if that wasnt necessarily true, they also both outnumbered the Vikings, and had a homefield advantage. The Monk may have a homefield advantage, but he's by himself. Against an experienced Viking warrior with ridiculously better protection. Martial arts and speed can only get you so far before you have to actually attack proper.

Honestly this seems to me to be an example of being contrarian for the sake of it. I say this because you have blatantly false info, and argumentation that really makes no sense to me. Many of your points here can easily researched, and the ones that can't are specious at best. If it is just a case of a lack of knowledge, then that's fine, but it seems too odd of an opposing argument to not at least address this.

The Shaolin Monks has no realistic chance of defeating the Vikings here. They have to both get through the shield and armor of their Scandinavian counterparts. All while having no actual armor of their own, a non-lethal staff, and generally inferior weaponry, and combat experience. I just can't see this battle as anything other than lopsided.

(edited by moderator)
VikingShaolin Monk
A reply to Detective Loki
0

Big Supp on both

Looking at the BFDA, it doesn't look like their services would involve the use of dynamite in combat. The improvised weapons have to actually make sense for the group to use, and for the BFDA at least, in my opinion it simply dosen't here.

Um, we know because it was a standard rifle for the Viet Cong to use (https://archive.org/details/personalfirepowe00ezel/page/18/mode/2up?q=mosin+nagant on Pg 18)  It's dots that can be connected reliably, because I can directly point to the Viet Cong using it, and as an operative and sniper for the VC it makes sense to give her that, especially since there are direct photos of her contemporaries strapped with Mosin Nagants as well. Your assertion relies upon the Leopard Society acquiring these weapons with no evidence, and one of them is even a weapon that had basically been replaced by other rifles, and wasn't used by a bunch of colonialist powers anyways. This example is not at all comparable.