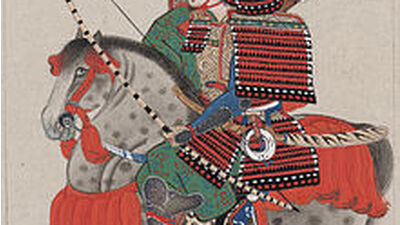 This battle has a large amount of inncorrect information within it about the Samurai and Saxon. First of all, the battle gives the Saxon a Boar spear as one of their weapons, even though the Boar spear was a hunting tool and not a weapon of war (likely confused with the Winged spear). They also got the Samurai's armor incorrect, giving the Samurai leather lamellar armor instead of anything thry actually used.

Let me get this straight, I was really happy when I saw a Japanese victory over our old rivals of China. However, I cannot help but notice the unfairness of the fight. First off, the Samurai was given steel armor against the Song's leather armor. that alone should be enough for a rematch. Then, Song was given a repeating crossbow, which was very likely used very rarely, if at all, during the Song dynasty. Finally, the Samurai was a 15-16th century samurai from the sengoku Jidai against the 12-13th century Song Soldier, when it was easy to use a 12-13th century Samurai from the Genpei war or Mongol Invasions.

For these reasons, I ask for a rematch. I've checked with Battlefan for reliable Chinese sources for Song equipment, and I have my own Japanese sources for Samurai ones. You know me, I'm good with Samurais. I may have hibernated lately, but I can scrap out a few hours and get a few stimulant pills (prescribed by doctor) to write a good battle if that means getting rid of whatever that disrespect towards Song China was.

Similar to my slew of Celt and Boudicca challenges this is all for one reason.The Rajputs would've never used the Aara, the area it was used in was never conquered by Rajput.

Vs Samurai, Spartan Soldier, Landsknecht, and Atilla the Hun

This battle contains two late medieval warriors fighting against a tribal and one from antiquity. The tech gap is huge here.

Both the layout and the battle are both typical 2010 quality. It mostly lacks information about the weapons and the warriors themselves, plus the votes were also of low quality. Time to turn this piece of coal into a diamond.

Shouldn’t the Knight vs Mongol battle be declared invalid since Mongols already defeated knights during the Mongolian Invasion of Europe.

This battle was a long time ago when expectations for votes and battles were pretty low and I want to rematch it because the new style for voting and battles could change this battle forever.