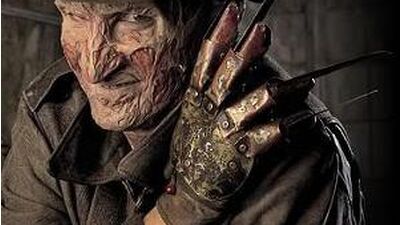 Vs. Scorpion: Jeez '12 Noob, learn to spell. Anyway, the battle greatly nerf Scorpion's hellfire manipulation, restricting it to only a few attacks. Slenderman can't cause his target to see only static. The static that you see in the Slenderman games is his presence messing with the player character's camera.

Vs. Freddy Krueger: Where are Slendy's tentacles, Beast? WHERE ARE HIS TENTACLES?! EDIT: Again, he does not have the ability to make his targets see static, that's just him messing with the camera.

Both of these fights give Freddy his MK moves and don't mention his movie abilities, Michael Myers doesn't stand a chance if this is MK Freddy and Scorpion vs. MK Freddy shouldn't count either as their full movesets weren't used.

Freddy Krueger has never shown any need to breath as a Dream Demon and in FvJ, actually leapt into the water to drown a victim there, and without Fear Gas, Scarecrow is pretty screwed even with Scarebeast who fares about as well as Jason did in the Dream World.

The blog doesn't mention Freddy's clawed glove or his abilities outside the Dream World like pyrokinesis and shapeshifting, claiming he is just a man outside it.

The ol' horror character will not be immortal shtick but beyond that, there's not much Hannibal can do to undead Jason Voorhees, who's picture is used, besides run him around as he's taken much worse hits than some blades and martial arts.

Like my previous challenge, Jason never used a shovel in the movies.

Jason only used the spear gun in the original movies and the composite bow in the remakes, making these both composite fights.

I'm retrieving my previous fairness challenge against Kraven vs. Predator after reading MD's info and a little bit of research done by my own.

Just how could Scarecrow , a human uses chemicals and gas, defeat Freddy, a demon that has various superhuman powers and can mess with reality/dream ?

I've noticed that previous fights on this wiki (and other Deadliest Warrior fanon) have made a point of saying that Jason's (and other slasher villains') invincibility has been "turned off" in a fight, for the sake of fairness. (like the Sick-Minded Slashers vs. the Classic Creepers fight that was deleted)

I feel this shows a fundamental misunderstanding of how this "invincibility" actually works.  For instance, in Halloween 4, Michael Myers apparently dies from falling into a mine shaft.  Remember in the first Halloween he survived being shot six times and falling from the second story of a house, and in the second movie he gets his eyes put out and suffers full body immolation.  So why does falling into a mine shaft finish him?

Simple:  The movie was over.

Same deal with Jason.  He's been beaten, slashed to ribbons, shot, burned, electrocuted, hanged, stabbed in the brain, and drowned, but he never stops coming until the movie's runtime is over.  Even then he usually comes back for one last scare, but for the most part he lies back down until the next sequel.  So, it seems to me like his apparent "invincibility" is conditional.

So, it seems to me like "turning off" his invincibility is unnecessary.  The end of a fight could equal the end of a film, so Jason is only invincible until the author decides the fight is over. (unless the voters decided Jason should win)

I know it doesn't make much sense, but we've let the filmmakers get away with it for over thirty years, so I don't see why the same logic couldn't be applied here.

Not to mention, Jason's apparent invincibility is one of the things that makes him uniquely dangerous.  An ordinary, mortal Jason is just a big, ugly, mentally-challenged guy with a blade, ie, not Jason.  You wouldn't field Legolas without his bow, or Thor without his hammer, right?

Another thing worth noting is that, barring the conveniant placement of a cell regenerator, Jason has yet to come back from being cut to pieces or blown up entirely. (although he did turn into a body-snatching worm-thing after being blown up in the film that must not be named) Just a suggestion for how a fight against Jason could end.

But, that's just my arrogant opinion.  Make of it what you will.