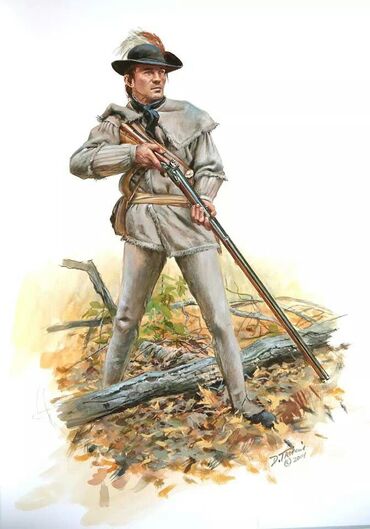 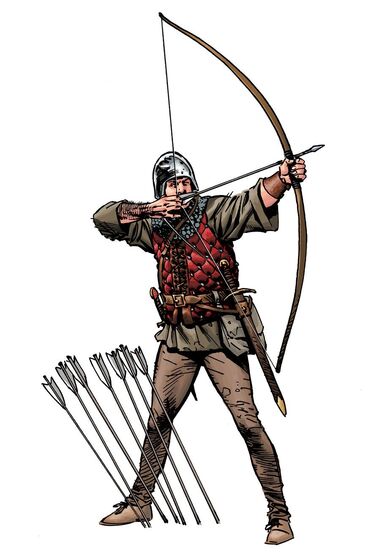 Easily the American Rifleman. His rifle definitely outranged the Longbowman's Longbow and can easily pierce the Longbowman's armor. I mean, it is basically chainmail and gambeson, which the rifle round can definitely pierce. Plus, the Americans would have fought with Native Americans who often use the bow and arrow in their encounters; at least for the most part; so it's practically like the American Rifleman fighting the Native Americans, albeit with better armor, better metallurgy, and a bit of a better bow.

Although, is it just rifle vs longbow or is this including any other weapon?

Hi guys! I want to say, first of all, welcome to both of you and I hope that you stick around and make some more battles. I want to let you know, however, that Discussions is not the place where we make our battles, and you'll get a lot more traffic, comments, and general feedback if you make a Blog Post. For more info on how to make battles and what our standards look like, please consult our Battle Policy.

Now specifically to DWHistorianZX, I want to say that I appreciate the thought you put into these historical warriors and the comparative analysis you were willing to undertake. However, I want to encourage you to challenge some of the basic assumptions you're leaving unchallenged that make your argument rather weak and undermine your credibility on historical knowledge.

The English longbowman is 100% not anything at all equivalent to Indigenous American warriors, even those who did use a bow. (It's worth noting two things here: first, that "Indigenous American" or "Native American" is an extremely vague and broad term that includes a huge range of ethnicities and political groups that spanned the continent, so not all Indigenous American warriors are the same or should be considered as such. Second, that, by the time of the American Revolution, many Indigenous groups had adopted gunpowder weapons and were just as proficient in their use as the European colonizers; as far as logistics are concerned, the Indigenous soldiers were at a disadvantage, but in terms of their skill with the weaponry, they were just as competent as their opponents.)

A lot of the advantages that you suggest a longbowman would have over an Indigenous American fighter, relative to their ability to challenge an American rifleman, are either superfluous or, at worst, irrelevant. For instance, what advantage does the armor confer against opponents for whom mobility and speed are more important (and whose weapons can penetrate the armor)? What advantage does a "better bow" confer? I'm assuming you think the longbow is superior because of a heavier draw weight and a longer maximum range, but neither of those are particularly important in, say, a New England forest or even somewhere out in the Plains or the West Coast. Especially not in a skirmish, where a smaller bow (again, with greater mobility, and ease of use on horseback) has a lot of tactical advantages. Lastly, the "better metallurgy" statement is issued without any evidence to support it (the other statements were similarly issued without evidence but at least there was a train of thought I could follow that helped me understand where you were coming from, even if I strongly disagree with it). I think it's pretty Eurocentric to assume that Indigenous Americans couldn't get their hands on good-quality metal, especially when they traded all the time with the colonizers for things like gunpowder. I admit that this is something I am not an expert on, so it's quite possible that longbowmen equipped by a royal treasury would have superior metallurgy compared to Indigenous soldiers equipped with what they could trade or take from defeated opponents, but I'm just as inclined to believe otherwise, especially given the centuries of technological advantages that the Indigenous people benefit from in such a comparison.

Now I know that this question was about an American rifleman vs. an English longbowman, but since you hinged a substantial part of your argument on comparing the longbowman to some hypothetical bow-wielding Indigenous Americans, I had to speak up. History and historical comparisons do not make for rock-paper-scissors comparisons. Just because Warrior A historically defeated Warrior B does not automatically mean they win or lose against Warrior C, irrespective of any similarities B and C might have. I hope this comment doesn't come across as harsh or condescending. I want to encourage you to continue in your apparent interest with military history, but I also want to encourage you to critically reconsider a lot of the basic and erroneous assumptions you seem to have. It's something that takes a lot of time. I am currently in graduate school pursuing a degree in history, and when I think back to a lot of the things I said online ten years ago, when I was in high school, I now realize that much of it was similarly rife with false suppositions and unchallenged assumptions. I am more than happy to suggest good historians and scholars whose works offer a good start to critical military history.

And like I said at the top of my post, welcome! Remember that most battles are done in blog posts anyway, so if you want to get more feedback and interaction from the community, that is definitely the way to go.

Hm...yeah, you do make a fair point there. I mostly used the comparison to illustrate how I would see the battle, but from what you have rebuttal, guess that mindset was a bit too stereotypical of me. My mistake. I'll keep that in mind for other battles I decide to comment on.

What do you think?